we did it or, to put it more accurately, the largest number of British voters who ever voted for anything, did it.  We are to leave the EU.  For weeks since the vote I’ve not dared utter these words for fear that our illustrious leaders would find a way to wriggle out of it.  David Cameron’s resignation didn’t convince me, nor did Teresa May’s appointment but her decision to appoint Boris Johnson, David Davies and Liam Fox to the top three Brexit positions – apart from providing her with armour in the event it all goes terribly wrong – tells me we have the best possible chance of making sure that we really, really are going to leave.  Now, god help us, it’s up to these three, their colleagues, our Prime Minister and an army of civil servants to make sure that we negotiate the right deal using all the cards we hold in our sixty-five million pairs of hands.

The first message that needs to go out is this:  There are no remainers or leavers.  We are all leavers now.

I’m not the one that bangs the drum for democracy, I just have to put up with it but for all of those who love to bang that drum, you asked for it, you got it, now abide by it and for heavens sake:  Stop the communal grieving and hand-wringing; stop talking us all down; stop praying for it all to go horribly wrong so you can bang the “I told you so” drum; get over it and get on with it.  We are leaving.  This is a good thing.  It has absolutely nothing to do with racism, despite there being some racists who agreed with us.  It has nothing to do with being against other people in Europe.  We are not going to shove off into the North Atlantic.  We are tethered to Europe, we are part of Europe, we are European, we love our European neighbours, we are leaving the European Union, that’s all.  The EU is nothing more than a flawed political project, run by politicians for politicians that is doomed to failure.

For a truly erudite opinion on the EU and why we voted to leave it, read this BBC Radio4 item by philosopher Roger Scruton.  Whilst you wouldn’t expect me to agree with everything he says, I find his analysis very much “on the money” and I love the way that, for once, we can hear an opinion on the EU that is calm and measured whilst not lacking a grain of passion.  Compare that, if you will, with the words of one Peter Mandelson (yes him!) whose mealy-mouthed confessions about how the Remain Campaign screwed up by not following his advice on how to manipulate the plebs, as he regards them, into “seeing sense” and voting the way he wanted them to.  It is precisely this man, his ilk, and what he represents, the views he espouses here, the plum job he holds for life at the heart of this rotten project that helped seventeen million people to make up their minds….and he doesn’t get it.  Well, coming from the man at the heart of manipulating the path to war in Iraq, that’s fine by me.  If I’m not mistaken, once we leave the EU, he and his cronies all lose their jobs- yay!

I do worry about Mrs. May though.  She’s hardly an intellectual giant.  That vomit-inducing sop to the nation outside #10 last night was really very worrying.  I am very worried that the venomous minnow Amber Rudd was given the Home Office, apparently because she sometimes wears a skirt – given she lacks any other qualifications and given the mantra that a person’s gender is more important than their capabilities.  As the not so erudite but very plain spoken Tom Winnifrith said of this policy:

“Out here in the real world we care not whether a cabinet minister is a woman or a man, whether they have had children or not and whether they are gay or straight. We do not want targets based on who you shag or what, if anything, results from that shagging. Would it be too much to ask just to have a cabinet with the most talented people in it?”  Here bloody here.

Time will tell but I don’t expect to be surprised.  Today we’re told that Mark Carney and his central banking colleagues are going to drop interest rates in order to “avoid a recession”.  Put it another way, he wants to devalue sterling, in the same way that every major economy in the world is trying to devalue their currency in competition with everyone else. 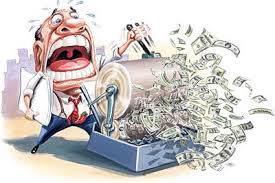 Well, Something which China has managed to do by stealth and almost unnoticed.  I get the motivation (but the media won’t report it this way, they’ll talk about how this benefits those with mortgages – as opposed to those who could only dream of having a mortgage) but right now, Mr. Carney, we should not be sending messages to the world that suggest we aren’t confident about our own future.  Then again, of course, you’re only here on a temporary contract aren’t you and, given you agree with the madness of low to negative interest rates, the manic printing of money, the amassing of untold mountains of government debt (which our grandchildren will pick up the tab for), the asset bubbles created by lunatic central bankers across the world, well, you probably will won’t you….

But I’d be lying if I said I really cared.  I’m a very happy bunny.  I’ve got the only thing I ever really wanted from my politicians, I’ve got our freedom back and I can’t wait to see what we can all do with it, together.