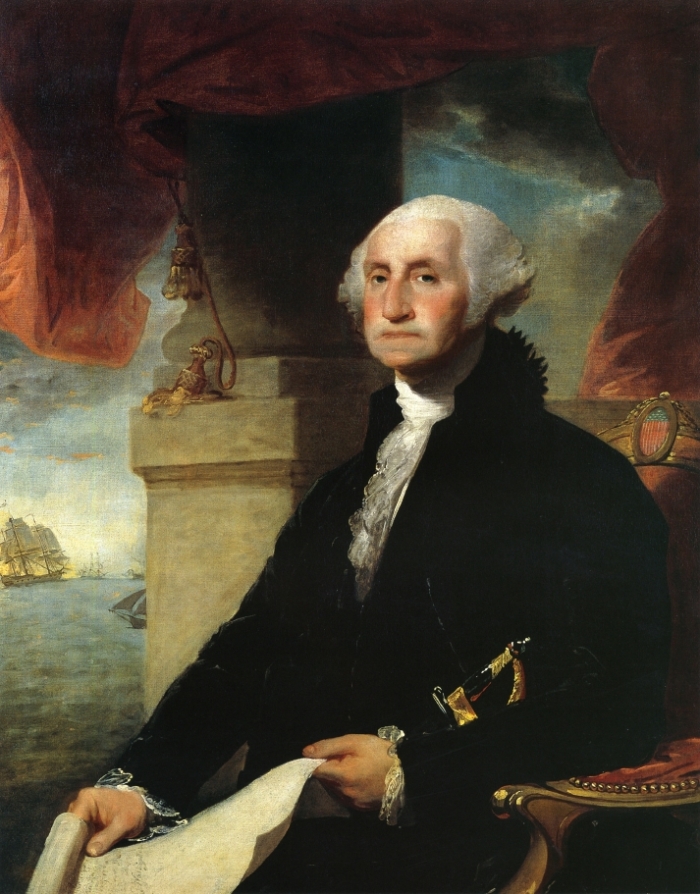 You can see it on his face.  Better yet you can read his resignation speech which echoes so much for me, it’s difficult to appreciate that this was written two hundred and twenty odd years ago – though I guess the language used is something of a giveaway.  Crafted by his loyal and brilliant Aide-de-Camp, Treasury Secretary and service-long friend Alexander Hamilton, in collaboration with The First President, this was presented in advance of his retirement after two terms of office, setting a precedent for the US Presidency for many years to come.

The subjects referred to in the speech owed much to the challenges of the time in which it was written.  The references to the insidious subversions and plots perpetrated by the devious egotist and avowed slaver, Thomas Jefferson weigh heavy in the text.  The recent adoption of the Jay Treaty with Great Britain, the attempts by Jefferson’s Republicans to get the US to side with revolutionary France in their ongoing war with England, Jefferson’s persistent attempts to humiliate and destroy Hamilton and his hatred of modern liberalism and capitalism, all these are clearly addressed.

I am particularly attracted to Washington/Hamilton’s views on political parties and their prescient perceptions on their deleterious effects on stable government.  The references to taxes and public debt, to constructing a strong, independent and outwardly friendly nation working in harmony with others but not establishing any fixed political agreements, enmities or favouritism but securing mutually beneficial trading agreements with all…music to my ears.

I very much wish I had known Mr. Hamilton, personally, and many in that country – and many without – would dearly love to see George Washington today in the White House he never quite lived to see for himself.  Aside from the obvious impossibilities of such a dream, its evident that Washington would despair of such a role given the way in which his fears came so rabidly to life.  A Senate, elected by the people of all things,  both houses riven by a partisanship that has divided the country for decades, brought it to an economic and humanitarian standstill, permanently at war, saddled with a debt that would make an immortal shudder, ridiculed all the great values he held so dear and crowned itself a king of celebrity with not a hint of irony.

His lack of faith in human beings has been amply proven and rather than learn anything from the great men of history we are simply doomed to repeat our errors to extinction.

..and they ask each other, “Who are these Elites the populists decry?  What are these uneducated morons talking about? They’re the great unwashed, racist rednecks of the world and they just don’t know enough to be able to vote the right way” – you really should listen to yourselves. And, “What the rest of the world needs is liberal democracy and we should make them understand that, by regime change if necessary!”. In the same breath as decrying the expansion of suffrage to the uneducated masses…..

In Palestine they voted for Hamas, that didn’t go down well and that was after the Egyptians voted for The Muslim Brotherhood, now we can’t have that, can we – and we didn’t. Britain voted for Brexit, America voted for The Apprentice – oh I just love a little irony. Shia vote for Shia, Sunni for Sunni, rich for the rich, the poor for the rich who try to sound like they understand the poor. Mostly they vote for someone who sounds like a leader, promises not to tax them and generally sounds like “one of them” or one of whom they wish they were. There are only rich people to vote for, where you can at least vote. Unlike the EU, of course, which is appointed directly by the Elite – and if they don’t know they are the Elite then they should shut the fuck up about education.

The same sentiments are rife within the coastal blue states of America. Privilege abounds, good deeds and kind thoughts are espoused – until the morons get it wrong and vote for a Republican. Worse, a rich, loud Republican who is more vocal about his success than they judge is polite. Put it another way, he doesn’t understand that you’re not supposed to flaunt it else the natives might get restless – as restless they have at last become, just as he rightly surmised.

Rather than examining their own culpability, they blame him. They think taxes should be raised on the rich but not on them. Their choice of residence is heavily influenced (amongst other things like the visibility of poor/coloured people in the area) by the level of the local taxes but heaven forbid anyone should suggest raising more to pay for services. They complain about the state of the roads, the lack of affordable healthcare but none of them wants to pay a penny cent in taxes – who does?! They like Latino immigrants and mock anyone who might pause for thought on the subject. How else could they afford the gardener, the builders, the nannies, the dog walker, the multiplicity of therapists and pseudo-medical practitioners? We can’t allow the building of affordable homes,  not in their own town. These would be occupied by poor people who can’t contribute much in tax – and that means we’ll have to pay more for the extra services their presence will necessitate. The divide is as wide as their very own Grand Canyon and yet they share more with one another than they will ever know – the only difference being the level of thinly veiled hypocrisy.

Racism, sexism, ageism, homophobia, they decry loudly, aggressively even…but discrimination is what it is, that’s all that it is. The only difference one to another is that each chooses his own target; the uneducated, the unemployed, the rich, the uncultured, the elitist, the Trump supporters, the Liberals, the Brexit voters, the Republicans, the Tories, Labour, the unions…anybody and everybody that is not one of them.

It crosses left and right, and is heavily focused in the middle; old and young (not so much), rich and poor. The one percenters are every bit as bigoted as the 99 percent they eschew – even that rather large portion of them that likes to think of itself as educated, cultured, liberal, progressive.  Lord spare me the self-righteousness! Let’s get real.  We all have our prejudices, that’s what we’re supposed to fight against if we genuinely want to think of ourselves as liberal and progressive. Calling yourselves by those labels is meaningless. For many it’s simply outright bigotry (seriously, look it up) but for most it’s thinly disguised as enlightenment, like the thin coating of sugar on a cheap toffee apple. It can become a hammer with which to beat someone over the head, in the wrong hands, yet won’t survive the first bite of curious enquiry.

Entitlement is a word that looms large in my thoughts, I see it everywhere. Something arrived at so fleetingly, in the grand scheme of the human timeline and that will be dashed on the rocks of hubris in a flash. Sodom and Gomorrah reverberate in my mind but often just the one word, sod’em!

In a single generation, if you were born in a lucky place, we’ve gone from antibiotics to gay marriage and back again to a world where antibiotics may no longer work and religious strife and persecution remain everywhere. Some things never change. The rich get richer, the poor get poorer, Russia is still the evil empire to the diehards, the Elites. The Israeli/Palestinian conflict still blights our lives and we continue to let them get away with it for fear of the charge of Anti-Semitism. Germany still insists on running Europe, regardless how others are made to suffer and we dare not mention them by name for fear of the not-quite-so-bad epithet of racism. Yet its okay to equate Trump with Hitler? I suggest you all go get an education.

If we are ever to get anywhere we have to learn to call a spade a spade. We also have to learn to stop calling things by names when it benefits no-one to do so.  There is only one race, it’s the same one we all belong to, it’s the human race. Racism, sexism and all the rest are just bigotry, just discrimination. Discrimination exists because human beings need to feel superior to someone, anyone. Those who call “Racist!” want to feel the most superior without the slightest notion that they harbour all the same unenviable qualities of a typical human being and that they practice equal discrimination every day of their waking lives. Those who are not content with merely feeling superior, needing real power and control over others are rapists, pious priests or politicians. The wannabes settle for bureaucracy, traffic control or prison management if they’re not up to snuff for the military, for one reason or another.

The world is full of too many words and not enough action. Words are used to hurt, to demonstrate superiority, to placate, to delude but the actions, the lack of action, speak volumes. Let’s stop abusing our language, let’s stop the over use and abuse of words till they are denigrated so far as to become meaningless and where the emergence of the real thing will arise, completely unseen, because the words have lost so much of their true value.

Here’s something we all have to get used to and we all will in time. Nothing is going to change. Not in our lifetime, not in our great grand-children’s, were that they were lucky enough still to have an environment sufficient to sustain any human life. If we don’t learn this before then we must at least learn it on our death beds. The arrogance of human beings is to believe that we can do with human nature in one generation, what evolution took millennia to achieve with nature itself. Let’s try some smaller bite-sized chunks for a change. How about being kind to your brother and sister, to your child, to your parents, to your neighbours, to your fellow countrymen, regardless their wealth or status in life, to your foreign guests, those who respect your rules and customs. If we can all practice these little things for a few thousand years then maybe, just maybe, there is some basis of hope for humankind on this crazily spinning ball of energy in this amazing, vast, unknowable infinitum of space.

Let everyone who is on their high hobby horse about everything that doesn’t meet their critical standards just relax a little and chill out. You want it all, in one generation? Really? Get a life.